Joel serves as the Contemporary Worship Leader for the 11am Contemporary Worship Service and is responsible for planning and overseeing the flow of Sunday worship. Joel has an Associates degree from Wallace State Community College and is now finishing up a B.A. degree in Music from the University of Alabama Birmingham, where he plans on graduating in December 2017.

Joel is the oldest of seven children and is originally from Cullman, Alabama. He grew up in church where his father also served as a worship leader. He is engaged to Sara and plans to be married in December 2017. 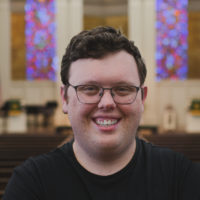